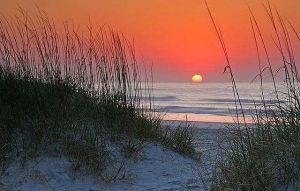 George Arthur Newton Sr., 95, of Beaufort, passed away at his home on Wednesday, March 17, 2021, surrounded by loved ones.

A funeral will be held at 2:00 pm on Tuesday, March 23, 2021 at First Free Will Baptist Church in Beaufort. The family will receive friends one hour prior to the service, from 1:00 pm to 2:00 pm. He will be laid to rest in Oceanview Cemetery following the service.

George was born on June 8, 1925 to Archie James and Sarah Lincoln Newton of Vandemere, in Pamlico County, NC George was one of twelve children, he and his 8 brothers all served in WWII, two of which gave their lives to the service of their country. Upon returning from WWII George met and married Joyce Dixon of the Lennoxville community. He worked for Tidewater Electric and Water for several years before being employed by Duke University Marine Lab where he was Assistant Marine Superintendent for the R/V Eastward, R/V John D. Wolfe and R/V Cape Hatteras for over twenty-five years.

He was preceded in death by his wife Joyce; daughter, Karen; and granddaughter, Amy Lewis Barnes.

In lieu of flowers, memorial contributions in George's name may be made to The Tunnels to Towers Foundation, The American Heart Association, or to the charity of your choice.

Condolences and life tributes may be sent to the family at www.noefs.net
Arrangements by Noe Funeral Service, Inc. of Beaufort, NC