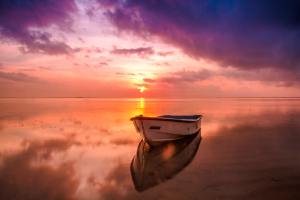 A funeral service will be held at 2:00 pm on Friday, April 30, 2021 at Live Oak Grove Christian Church in Beaufort with Rev. Bill Pollock officiating. He will be laid to rest at Westminster Gardens Cemetery in Greensboro on Saturday, May 1, 2021 at 2:00 pm.

George was born on October 3, 1931 in Beaufort to Sadie Miller Russell and George Randolph Russell. He attended Beaufort Graded School then helped his father in his oyster and clam business until George was drafted in 1952. He served proudly in Germany during the Korean era. When he was discharged, he attended Kings Business College where he received a degree in book keeping. From there, George moved to Greensboro where he worked for Pegrim West Building Supply. He kept the books there for 22 years and then started driving delivery trucks for 24 more years. He met his wife Irvine Minter Russell in Greensboro and they were happily married for over 35 years. George had a hobby working on mowers, appliances, and TV’s. George and Irvine attended Bethel Baptist Church in Greensboro faithfully.

He was preceded in death by his parents; his wife, Irvine; and his brother, William Thomas “Tommy” Russell.

George is survived by his several nieces and nephews and his step-daughter, Jeanette Bayer.

In lieu of flowers, memorial contributions in George’s name may be made to Live Oak Grove Christian Church.